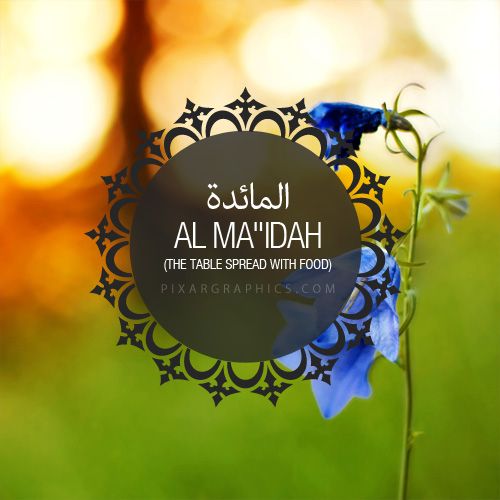 If we meditate on the beginning and end of this chapter and ponder on the general verses which have been revealed in it and look at the admonitions and the stories which it contains, we will find that the general theme of the chapter is to call the people to fulfil the covenants and to uphold the valid agreements whatever they might be. It warns against breach of agreement and cautions those who take the covenants lightly. It shows that Allãh has made it His habit to deal with mercy and lighten the burden of those who guard themselves against evil and belief, and then again guard themselves against evil and do good work. On the contrary, He deals harshly with those who commit outrage, exceed the limit and overstep the bounds by throwing away the collar of obedience and going out of the boundary of covenants which have been made in the religion.

That is why you will see that the chapter contains many laws concerning legal punishment and retribution; there are stories of the dinner table, of questioning of the Messiah and of the incident of the two sons of Adam; it also points to a lot of injustices of the Israelites and how they broke the covenants which were taken from them; also there are many verses in which Allãh describes His Grace on the people in various matters like perfecting the religion, completing His favor, making the good things lawful to man and legislating the ways of purification without putting the people into any difficulty and hardship.

This was in conformity with the time when the chapter was revealed. All reporters agree that it was the last detailed chapter which was revealed to the Messenger of God nearing the end of his life. It has come in both sects’ traditions that it is the abrogating chapter, not the abrogated; and it was proper in this background to emphasize the admonition to fulfil and safeguard the agreements which God has taken from His servants, and to remain firm on it.