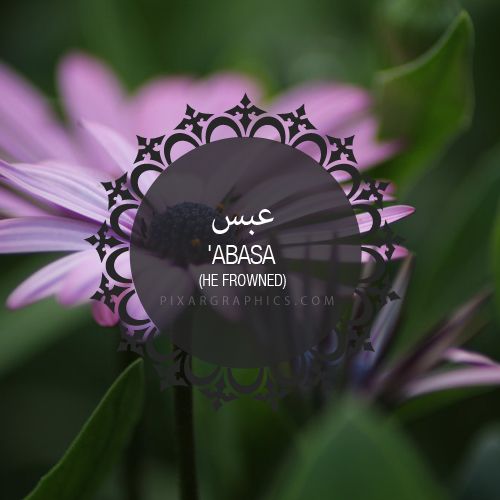 This chapter was revealed in Mecca and consists of 42 verses. Traditions from Sunni sources state that the opening verses of this chapter were revealed about a blind man called Ibn Umm Maktūm, who came in the presence of the Prophet while the Prophet was having a private conversation about Islam with some leaders of the Quraysh tribe. The Prophet frowned because of his intrusion. As a result, God reproached him with these verses. There are also some Shia narrations which make reference to this narrative.

According to other Shia accounts, it was a man from the Umayyads who frowned and turned away when he was approached by Ibn Umm Maktūm while he was in the company of the Prophet. Subsequently these verses were revealed. We will present a comprehensive analysis of these accounts under our examination of narrations, by God’s will.

In any case, the aim of this chapter is to reprimand those who prefer the affluent and wealthy over the weak and humble believers; those who elevates the people of this world and degrades the people of the hereafter. The chapter then talks about the frailty of human creation, and their utmost dependence in the management of their affairs. Despite all this, they are ungrateful to their Lord’s blessings and His magnificent direction of their affairs. The chapter sums up by discussing the resurrection and retribution as a word of admonition. This chapter is Meccan beyond any doubt.

Note: Also read the post on “Who Frowned at the Blind Man” under “glimpses”.