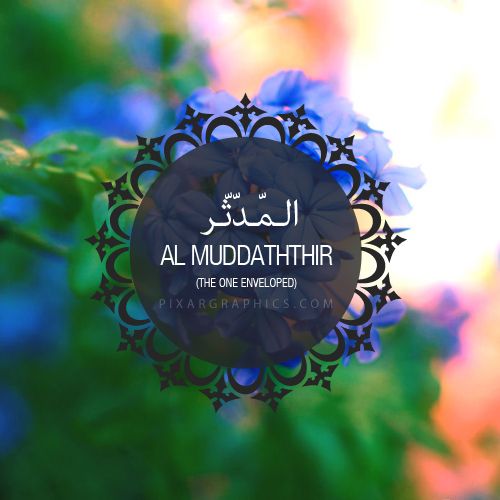 This chapter was revealed in Mecca and consists of 56 verses. The chapter begins by commanding the Prophet to warn the people, with a tone which suggests that it was revealed at the outset of the Prophet’s mission. It then describes the exalted status and lofty position of the Qur’an. It vehemently threatens those who deny this Book, accuse it of sorcery, and turn away from its call.

This is among the earliest chapters—called al-ʿatāʾiq (the ancient ones)—which were revealed to the Prophet at the beginning of his mission. Some have even suggested that it was the very first chapter of the Qur’an to be revealed to the Prophet. The context of the chapter refutes this view, since it talks about an incident when the Prophet recited the Qur’an to the people, who then responded by rejecting it, turning away from it, and calling it a magic handed down (74:24). Others have suggested that the first seven verses of the chapter were the very first revelation of the Qur’an. This entails that the chapter was not revealed at once. The context of the opening seven verses does not reject this possibility, but it seems that the first verses of the Qur’an to be revealed were the opening verses of Sūrah al-ʿAlaq (Chapter 96), as indicated by their theme and context.

Another suggested possibility is that this chapter was the first chapter that was revealed to the Prophet when he was ordered to make his call public, after a period of secret daʿwah (mission, propagation, call). This transition is reflected in the verse: So proclaim what you have been commanded, and turn away from the polytheists (15:94). This view can reconcile between a number of seemingly contradictory accounts, which say: (1) This was the first chapter that was revealed. (2) It was revealed after Sūrah al-ʿAlaq. (3) This chapter and Sūrah al-Muzzammil (Chapter 73) were revealed together. Nevertheless, this view remains at the level of mere possibility.

What we can say for sure is that this chapter was one of the earliest chapters of the Qur’an that were revealed to the Prophet. Its opening seven verses command him to warn the people, and include other injunctions as implications and requirements of that.