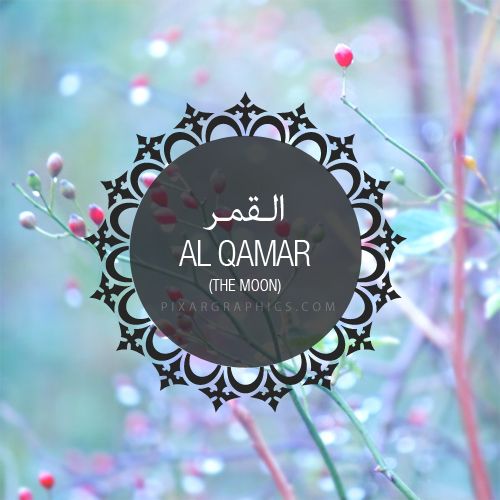 A chapter replete with forewarning and call for alarm except for its last two verses, which give glad tidings to the Godwary of their entry into Paradise and presence with their Lord.

The chapter begins with reference to the miracle of the splitting of the moon, which came at the hands of the Messenger of God (peace be upon him & his family) after it was suggested by some of his people. Next, it speaks of his being accused of sorcery by his people and their impugning of him and their following of base desires despite having received proscriptive prophecies of the events of Judgment Day and the fate of the destroyed nations of the past. Next, He then resumes [His forewarning] with a summary of these prophecies spoken in a wrathful and condemning tone, describing their desolation upon their resurrection from the graves on Judgment Day and upon their presence for reckoning.

This chapter is Meccan, as evidenced the line of meaning of its verses. No credence should be given to the view that it was revealed during the battle of Badr, nor to the view that considers part of its verses to be Medinan. Lastly, the verses about the [divine] determination (verses 49-50) at the end of chapter are among its cardinal verses.