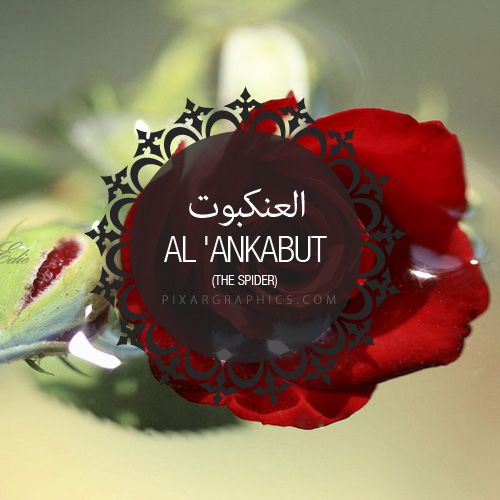 Based on the tone of this chapter’s verses, and especially those at its opening, it appears that some of those who had believed in the Prophet in Mecca before the migration (hijra) withdrew from him out of fear of the persecution with which the polytheists had threatened them. This is because the polytheists used to call them to return to their religion and promised to bear for them their sins in return for following their path. However, if they refused, they would persecute and harass them to force them back into their religion.
God alludes to this with the words:

Amongst those who gave up their faith were those who gave it up because their parents pressured them to come back to their religion and implored them to renounce their beliefs, like some of the children of the polytheists according to the rebuke delivered in the verse: We have enjoined man to be good to his parents. But if they urge you to ascribe to Me as partner that of which you have no knowledge, then do not obey them (29:8). And this chapter was sent down concerning the matter of these persons.

So, based on what we can glean from its beginning, its conclusion and the general tenor of its verses, the goal of the chapter is to say that what God means by “faith” is not merely to utter the words: “We have faith in God” (29:10) but to have the reality of faith which does not shake with storms of persecution, nor change with the changing of time, rather which stands firm and immovable in the face of trials and tribulations. People will not be let off just because they say “We have faith in God” without being tried and tested to make visible what their heart contains of the reality of faith or the blemish of infidelity. God surely knows those who are truthful and He knows the liars too.

Such trials and persecution are a divine custom that cannot be avoided; they happen to people today just as they happened to peoples past, like the peoples of Noah, ʿĀd, Thamūd, Abraham, Lot, Shuʿayb and Moses. Some of these went aright and others perished; God did not wrong them, rather they used to wrong themselves.
So whoever says: “I have faith in God” must remain steadfast upon his faith and worship God alone. And if he cannot fulfil his religious duties, then he should emigrate to a land where he can do that, for God’s earth is expansive. And he should not fear a hard life because sustenance is upon God and how many an animal there is that does not carry its own provision. God provides for it, and for mankind.

As for the polytheists who persecute the faithful without their having committed any crime save to say “Our Lord is God,” they should not fancy that they are thwarting God or vying with Him. As for their treatment, harassment and persecution of the faithful, it is only a test for them and the faithful which is not outside of God’s knowledge or determination. It is a test and it will be preserved for them; if He wishes he will seize them by its evil consequences in this world, and if He wishes he will put them off until the Day on which they return to Him and they shall have no escape.

And as for whatever arguments they contrive and falsehoods they rely upon, they are refuted and cast back upon them; the proof has been clearly established for them.

This summarizes the goal of the chapter. The corollary of this is that the whole chapter must be Meccan. Those who say it is Medinan, whether in whole, most or part—and we shall discuss this further in the study of narrations—are incorrect. The contents of this chapter are only compatible with the time of great pressure and hardship before the migration.