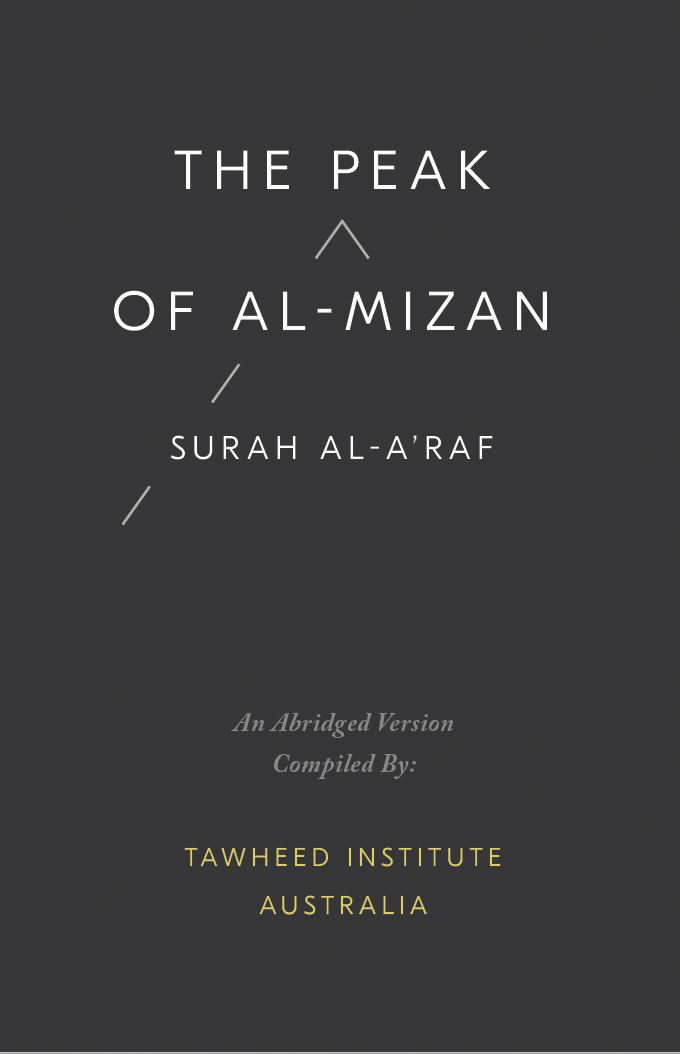 Sūrah al-Aʿrāf (the seventh chapter of the Qur’an) is replete with evocative, often eschatological imagery which whets the desire of the reader or hearer to enquire deeper about it. Who are the eponymous “men on the elevations (aʿrāf)” between the garden and the fire? What is God’s creational command? What is the throne of God, and what transpired between God, Satan, Adam, and the angels? And can God manifest Himself?

These are only some of the questions piquing the interest of the careful reader. Naturally, many readers will turn to the vast exegetical literature to uncover more of the secrets of these verses. However, sometimes even the most enthusiastic student is overwhelmed by the sheer amount of grammatical and technical detail in exegeses and yearns to get directly to the point. This is certainly the case with Tafsīr al-Mīzān: while some readers relish ʿAllāmah Tabātabā’ī’s scrupulous grammatical ruminations, others wish to know more about what the Qur’an is saying, and less about the specifics of exactly how it is being said. Furthermore, given its pre-eminence and comprehensiveness, many readers turn to Tafsīr al-Mīzān as a first source for understanding the Qur’an.

Therefore, in order to ease the task for the reader, this abridged version of the exegesis of Sūrah al-Aʿraf was prepared. This single, portable volume contains the most salient points of ʿAllāmah’s exegesis on Sūrah al-Aʿrāf minus the intricate grammatical, technical, and narrative discussions (which are often near-impossible to render wholly in English anyway). Since ʿAllāmah wrote in a traditional dialectical style, often presenting opposing or weaker viewpoints before his own, arriving at his preferred view requires sifting; therefore, to that end, the salient points of his intellectual excursions have also been summarized to aid the reader in grasping his main points and to prepare the reader for approaching his longer discourses, should the reader later intend to do so. Wherever necessary, narrations have been quoted as well. This abridgement was prepared by the Tawheed Institute (in Australia) and based on Tawus Raja’s meticulous and fluid translation of Volumes 15-16, although in some cases, his translation was lightly edited for ease of reading and continuity.

But why Sūrah al-Aʿrāf when so many sūrahs of the Qur’an are grounded in figurative language? In addition to the essential curiosity that Sūrah al-Aʿrāf inspires, there is another reason. This reason is rooted in the mystical and scholarly traditions, both of which ʿAllāmah partook of. Some of ʿAllāmah’s students and, indeed, some exegetes have identified this sūrah as the peak of Tafsīr al-Mīzān.

Interested readers are often encouraged to jump into Tafsīr al-Mīzān at this starting point, rather than at the beginning, for the exegesis of this chapter features foundational discussions which equip the reader with the essential tools for exegesis. Furthermore, the central theme of the chapter succinctly embodies the central theme of the Qur’an as a whole. The main message of the Qur’an can be summarized as God’s covenant with humankind to serve Him alone; that human beings are born intrinsically pure and with an unadulterated conception of their position vis-à-vis the divine, but that the vagaries of history and culture deviate them. Those who stay true to their inner nature and inner call reach the garden (perhaps, after passing the men on the elevations), whereas those who fail are composted in the fire. This theme is expressed succinctly and eloquently in this chapter through short narratives spanning the creation on the human to the final end. Each of us finds ourselves in the midst of this narrative—in our own societies, our own lives, with our own capacities and understandings —and, through seeing the overarching narrative of history, we can put our lives into perspective and understand where we should set our aim. In that regard, the Qur’an also carries out one of its other primary goals: not just to instruct people, but to spur people to think about the scripture, about the world around them, and about themselves.

We hope that ʿAllāmah would have approved of the impetus behind this abridgement, and we hope that the readers will benefit from this work. Those who find it too meagre and fare to sate their appetites for knowledge and understanding are encouraged to tackle the full, original English volumes (15 & 16).

Foreword by Dr. Amina Inloes (The Peak of Al-Mizan)